Amazon has launched a new initiative called Buy With Prime, which expands the reach of its Prime subscription service beyond Amazon.com — a significant shift in its business strategy that could help it compete with fast-growing rival Shopify.

Merchants who ship products through Amazon’s warehouse and delivery services (known as Fulfillment by Amazon) will be able to include Buy With Prime buttons on their websites. This will allow Prime members to buy directly from these stores while still receiving the benefits of Amazon’s subscription service. There are three of them: free shipping, next-day delivery, and free returns. Buy With Prime will provide additional convenience and value to Prime subscribers, but its significance to Amazon goes beyond simply increasing Prime revenue. The launch of Buy With Prime is also an expansion of the company’s sizable footprint in the logistics sector (the business of actually moving physical items around) as well as a means of competing with rival e-commerce platform Shopify (which lets merchants quickly build their own storefronts).

One common complaint levelled against Amazon by merchants is that it tightly controls its customer relationships. If you sell your products on Amazon.com, you’ll have the advantage of displaying your wares in one of the internet’s largest shopping malls, with programmes like Fulfillment by Amazon and Amazon Prime making delivery easier and faster for both you and your customers. However, Amazon is watching over your shoulder, collecting data on what you sell and threatening to clone your product and put you out of business. (This is essentially what the company is accused of doing in various antitrust lawsuits.) 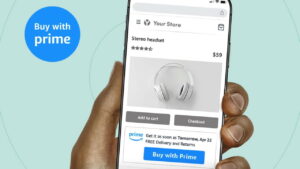 This is why Shopify has outperformed Amazon. It does not have its own buyer marketplace (you don’t go to Shopify.com to buy toilet paper and curtain rails), but instead provides small and medium-sized businesses with tools to quickly set up their own shops, emulating, in theory, the ease and simplicity of the Amazon shopping experience.

Amazon, on the other hand, is loosening its grip on that customer relationship by offering Prime benefits on merchants’ own websites, potentially easing tensions with merchants. “Allowing merchants to offer Prime shopping benefits on their own direct-to-consumer online stores is an exciting next step in our mission to help merchants of all sizes grow their business,” one Amazon executive says in a blog post announcing the initiative.

Those benefits, however, are not free, and Amazon will charge merchants a variety of unspecified fees to include Buy With Prime buttons on their websites. “With no fixed subscription fee or long-term contract required, merchants can expand or cancel at any time,” Amazon says.

Also read: Free Fire MAX Redeem Codes from Garena for April 24th: Don’t miss out on the chance to get some free stuff today