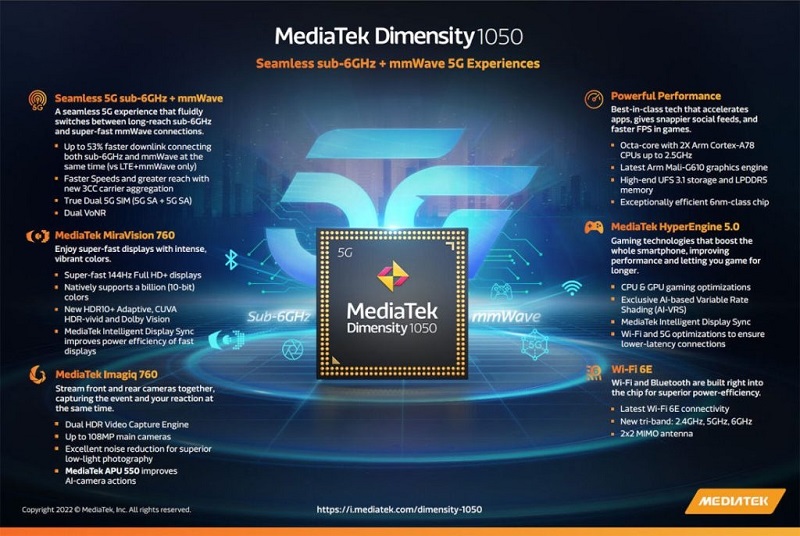 Taiwanese chipset company MediaTek has been on a tear with its Dimensity series CPUs, capturing a sizable share of the market. In a recent development, the semiconductor manufacturer has expanded its offering even further by introducing the MediaTek Dimensity 1050 chipset. The processor was introduced as a simplified version of the MediaTek 1100 chipset. It is, however, the company’s first CPU to feature dual mmWave and sub-6GHz 5G connection.

The recently released MediaTek Dimensity 1050 is an octa-core processor constructed on the company’s 6nm technology, with two ARM Cortex-A78 performance cores operating at 2.5GHz. The chipset manufacturer has not released the specifics of the efficiency cores, however, it is thought to be six ARM Cortex-A55.

The processor is paired with an ARM Mali-G610 GPU and supports MediaTek’s HyperEngine 5.0 which gives users more optimization tools and capabilities for improved game performance.

The Dimensity 1050 processor includes Full HD+ resolution panels with a refresh rate of up to 144Hz. The chipset also supports hardware-accelerated AV1 video decoding, HDR10+ playback, and Dolby Vision on the devices’ displays. The Dimensity 1050 combines mmWave 5G and sub-6GHz to allow for fluid network band migration and is built on the ultra-efficient TSMC 6nm manufacturing process with an octa-core CPU. The Dimensity 1050 chipset and its combination of sub-6GHz and mmWave technologies, according to the company, will enable end-to-end 5G experiences, uninterrupted connection, and greater power efficiency to satisfy everyday users’ demands.